This post was supposed to come to you live from the chambers of the Richmond (California) City Council, where the council had been scheduled to review the final administrative draft of a massive four year, $2.5 million general plan update. Posting from the chamber was not designed as an act of blogosphere theatre, nor because the global Polis audience was demanding a look inside the scintillating minutiae of the American planning process; rather, I was scheduled to testify in front of the council about how the travesty of what has happened to the hopes for equitable development or social justice being written into a document designed to guide "the next 100 years" of the city's development.

Richmond is a spectacularly American place, an industrial city cum bedroom suburb where a halfway critical urbanist could teach most of the history of the American metropolis without ever straying far from its 32 miles of shoreline or its labyrinth political geography, both a relic of the defensive incorporation wars that so define the American urban and suburban west. It is a city where Kaiser built an empire and helped win a war by cranking out almost a ship per day in 1943, an effort that forced him to open up a health clinic to treat injured workers which would evolve into the first HMO in America. It is a city that helped make Rosie the Riveter famous, where a black man would become mayor in 1964 - three years before Gary, Indiana or Cleveland, Ohio - and where a white, female, green party mayor would win a hotly contested election in a 2006 election while the city still had a black plurality. It is a city where Latinos and Laotians combined will soon be a majority, where politicians talk of the green economy and solar panel manufacturing and green jobs, where citizens fight about open space and environmental justice and casino development, and where Chevron and heavy industry fights to maintain its grip on what many saw as a company town for the better part of a century. It is a city which has become the national poster child for urban violence not once but twice over the past four years. It is a city of roughly 100,000 people where one in eight families lives in poverty, where one in every ten houses was foreclosed upon in 2008 alone, and where life expectancy in one zip code (94801) is 16 years less than another zip code in Walnut Creek, less than 30 km away.

Into this potent mixture of past and present stepped an ambitious general plan update, a process mandated by California law, overseen by the Planning Department and the Planning Commission, and organized and written by a prominent local consultancy. As is de rigueur these days, citizen participation was encouraged, and civil society largely stepped up to weigh in on the future of the "City of Pride and Prejudice." The coalition that I work and volunteer for, the Richmond Equitable Development Initiative (REDI), came together to push for strong language in the general plan around issues like environmental justice, affordable housing, sustainable transportation and living wages which impact low-income communities and communities of color in Richmond. Ours was not a radical call, especially given Richmond's struggles. We explicitly recognized the importance of Richmond's industrial past and present and what we hoped would be a greener industrial future, replete with cleaner companies, living wage local employment and better corporate citizens. 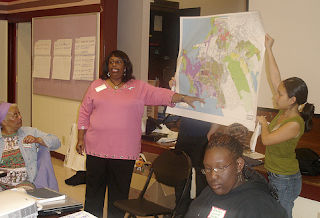 To this end we "participated" in the true sense of the word - we attended countless public meetings, organized multilingual public education sessions to help our members learn about planning in four languages, read and reread and analyzed and critiqued and supported countless renditions of general plan elements and maps and policy documents and position papers. This was a participatory process in Richmond not simply because the official planners and their hired consultants made it so but because community groups and local citizens and advocacy organizations bought into the process and decided to invest time and money and research and energy into a plan we all hoped would produce a better future for the city, its businesses and organizations, and its citizens.

All this work over four years produced a draft plan in June, a plan that while highly imperfect and overly vague was certainly an improvement over the outdated plan. We began gearing up for the Planning Commission and City Council hearings for this December, ready for one more push to infuse the hopes and plans for equity into the guiding document of the city. Yet just one week before the December 9th Planning Commission meeting to review the plan, a "new" draft was released without public fanfare. Much of the specific language about green jobs, cleaner industry, community planning, health goals, workforce development, or toxic remediation had been stripped out, and the following line had been inserted, "The City will work to retain and modernize heavy industry to ensure the continuance of Richmond’s industrial base." 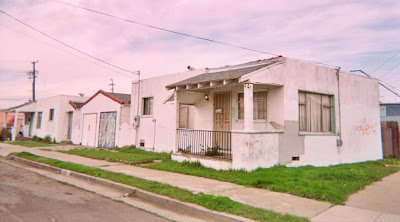 So here we are again in the company town, not in the green industrial dreams of the 21st century but in the smokestack nostalgia of a 20th century city which has never truly reckoned with the Superfund legacy which is still making its (mostly black and brown and Asian) citizens sick. Few capture this legacy as well as Camilo Jose Vergara - take a look at his powerful photos of Richmond, for industry is reaching out with its still powerful hand to preserve much of the status quo you see pictured there. Yet for better or for worse, tonight's meeting was postponed until the new year, meaning that the end of this story has yet to be written. We shall see.


Credits: Image of Laurie Chinn teaching about land use from Diana Abellara. Image of a house in Richmond from the Center for Community Innovation. Map of Richmond from Google. Video of health disparities in the East Bay from the Bay Area News Group.