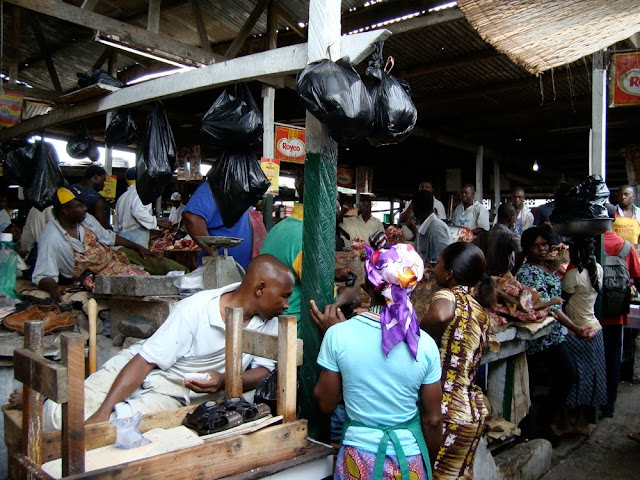 Laura Alfers is a researcher for WIEGO, a global action-policy research network with a focus on improving the status of workers in the informal economy. She has just returned to South Africa after setting up a new program on Occupational Health and Safety (OHS) in the street markets of Accra, Ghana. Preliminary studies have yielded valuable information on the problems facing informal workers, many of which stem from urban planning initiatives that have not incorporated community input. Following an earlier post on the inclusion of informal workers in governance and planning, I recently talked with Laura about WIEGO and the project in Accra.

How would you describe WIEGO's approach to improving working conditions in the informal sector?
We support informal workers' organizations and gather data on living and working conditions. Many people work in hazardous and unconventional environments, such as waste dumps and roadsides, which leave them vulnerable to occupational injury and disease. So in January 2009 we launched a six-country study on OHS conditions among informal workers.

What are the goals of the OHS study?
We hope to better understand health and safety risks in different sectors and workplaces, and improve data on occupational sickness and injury. We're working to bring together organized labor, informal worker associations, employer organizations, government, and others who can support the efforts of informal workers to improve health and safety conditions in their communities. We would like to set up alliances with other groups around OHS, including city planners and environmental organizations.

Who have you been working with in Ghana?
In September and October we ran a series of diagnostic focus groups with market and street traders in and around Accra. This was done in collaboration with StreetNet Ghana Alliance, which is affiliated with StreetNet International – a global organization of street vendors, market traders, and hawkers. The associations we're working with include the Makola Market Traders Union, the Ga-East (Madina) Traders Union, the traders from the Pedestrian Shopping Mall, and the Takoradi Traders Association. 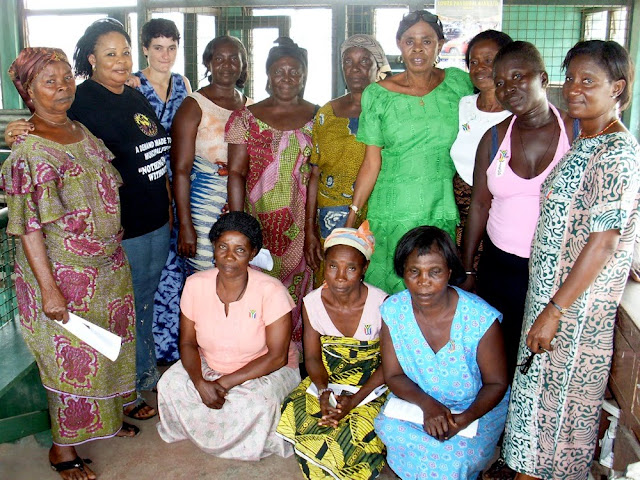 Laura Alfers (third from left) with representatives from StreetNet Ghana Alliance and the Takoradi Traders Association.

Have you found any links between city planning and OHS?
Yes. The clearest example is the Pedestrian Shopping Mall (PSM) – a relatively new market designed by the Accra Metropolitan Assembly (AMA) to accomodate hawkers who were forcibly removed from the Accra Central Business District (CBD) in 2006. Although AMA planners initially consulted with traders, their comments and suggestions were ignored. As a consequence, the PSM is a failing market. There are few customers, less than half the stalls are occupied, and working conditions are unsafe and unhealthy. 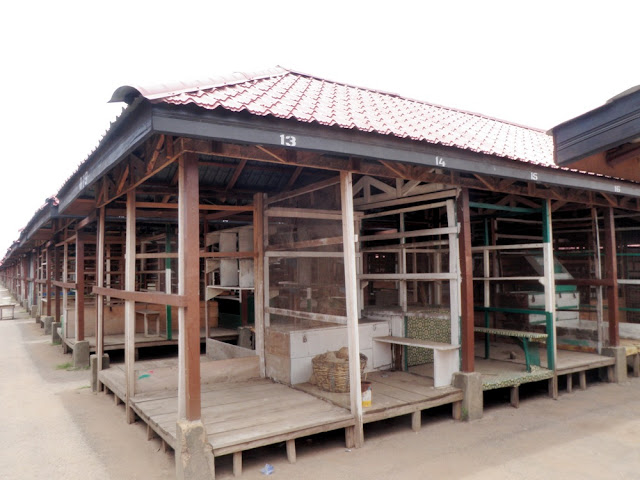 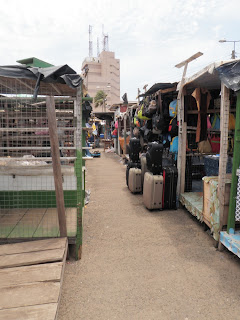 The PSM is free of customers on a weekday morning, and many of the stalls are empty.

Which aspects of the PSM plan have been especially problematic for local workers?
Probably the most evident is the high concrete wall, which makes the PSM practically invisible to people passing by. Public awareness of the market is so low that when one trader wrote a letter to the police stationed nearby, they were “surprised to hear that there was a market known as PSM right next to them!” The low level of passing trade has caused traders to abandon their stalls. Many of the empty stalls are now being used for drug peddling and prostitution, which poses a safety risk for legal businesses and their customers. The traders explain that a wire fence would have been a better way of enclosing the market area, allowing potential customers to see the market more clearly. 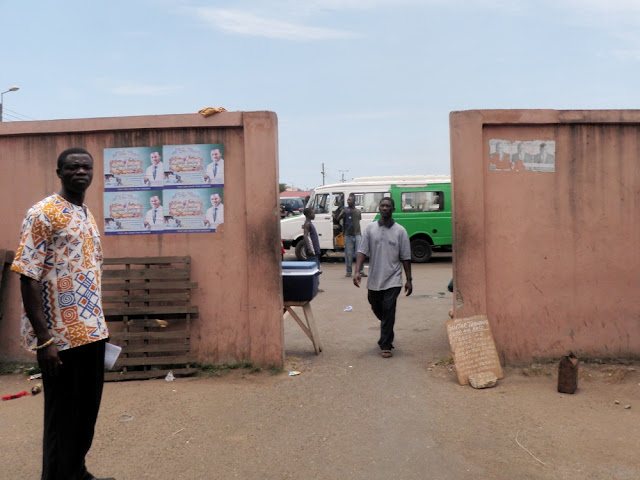 A narrow entrance in the market wall.

The entrances and exits to the PSM are narrow gaps in the wall. Small entrances prevent the traders from transporting their goods to the stalls in bulk. Traders have pointed out that if there was a fire in the market, it would be very difficult for them to remove their goods through these exits. The wall is also not very stable, posing a safety hazard in some areas. 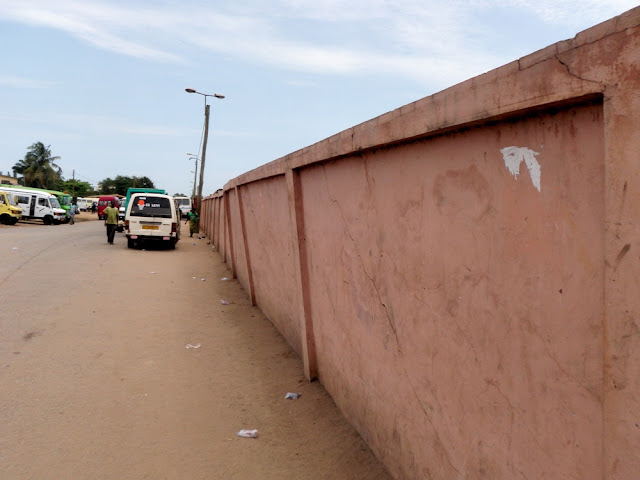 Some sections of the wall appear ready to collapse.

When the PSM was first built, drainage was poorly designed. Several smaller drains were meant to flow into a large central drain, which eventually leads to the ocean. However, the smaller drains directed the flow of water away from the main drain, causing flooding throughout the market and damaging the goods of many traders. The AMA has since addressed this problem by reconstructing the smaller drains so that the water flows into the main drain. 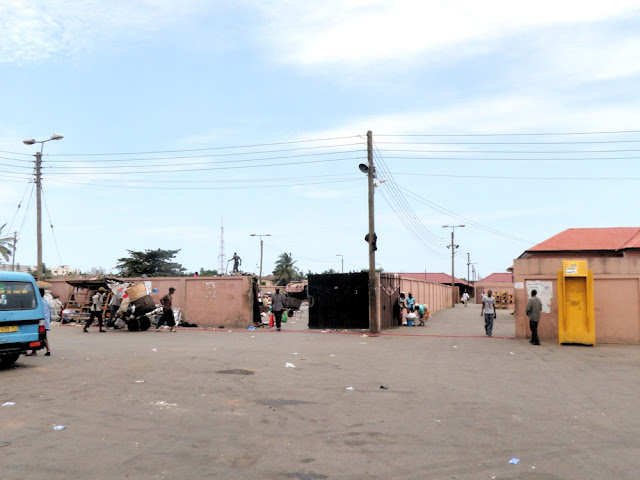 The PSM is divided by a lorry park (a stop for trucks and other vehicles) and a central refuse container. One half of the market is occupied by traders, although at least a quarter of these stalls are empty. The second half of the market, which is the larger section, is completely empty. The traders attribute this to the lorry park, which obscures the presence of the second market area. Few people know that the market extends beyond the lorry park, so the traders don't want to trade from that area. They argue that the lorry park should have been positioned behind the market rather than in the middle of it, as customers would then have to pass through the entire market on their way to the lorry station. 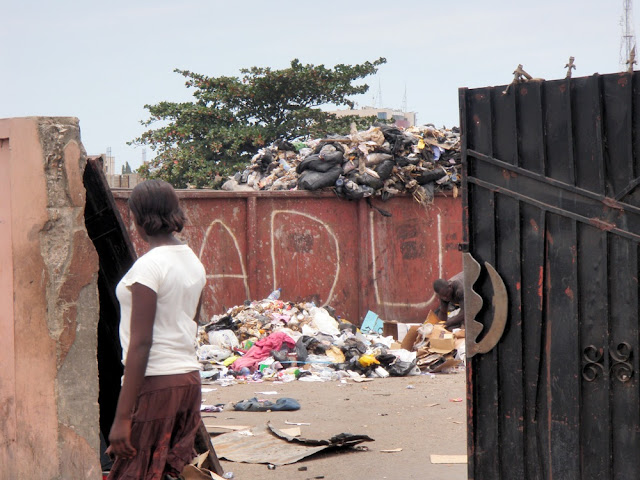 As for the refuse container, rainwater flows through it into the occupied section of the market. Then traders have to cope with foul smelling puddles of water, which pose additional health risks. Refuse is often burned in the central container, which means traders and customers have to breathe polluted air on a regular basis. 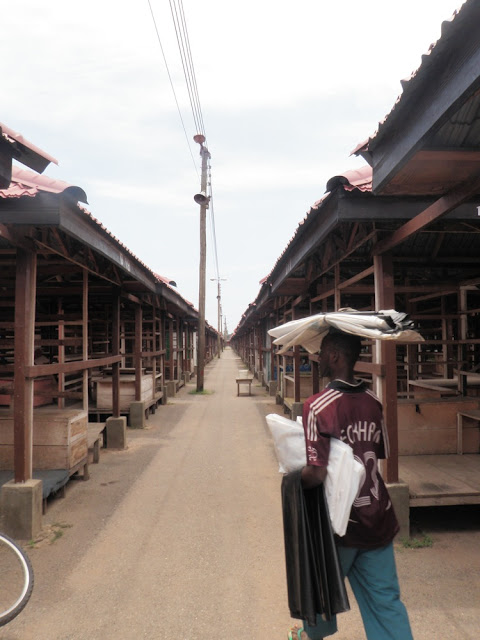 During the construction of the PSM, the planning committee decided not to provide electricity, because it would be a fire hazard in the wooden stalls. Although power lines run through the market, traders are unable to access electricity from their individual stalls and there is no lighting. This has increased the risk of crime, and left traders feeling vulnerable after dark. Moreover, some have started tapping into power sources illegally, which is likely to increase the risk of fire. The traders argue that the AMA should have built the market stalls out of a less flammable material and allowed for the provision of electricity in the individual stalls.

How might the findings in Accra contribute to better city planning?
I think one of the most important lessons from the PSM study is that many problems can be avoided when planners incorporate the feedback of informal workers into new development projects. Although unforeseen circumstances will arise, and incremental improvements are also important, I was impressed at how clearly the traders explained how the market should be structured to meet their needs. The PSM was planned and built without meaningful consultation with those who were meant to work there. The result has been inappropriate infrastructure and policies that make it very difficult for the traders to be productive, healthy, and safe. Many of them have now returned to hawking their wares on the streets, creating further problems for the AMA.

Do you know of any promising initiatives aimed at encouraging the participation of informal workers in planning decisions?
WIEGO is part of the Inclusive Cities Project, which coordinates and supports efforts to rethink urban planning, regulations, and policies in cooperation with informal workers. If anyone is interested in finding out more about this project, there is a lot of good information at www.inclusivecities.org.