Questioning the Obsession with Cars

There’s a dirty little secret about driving: Nobody likes it. Most people are not able to admit it, for they are unaware that congestion, the constant and excessive costs of car ownership and road rage are avoidable. No survey can generate responses such as, "I only think I like driving because I see few alternatives, and all of those threaten my identity."

Welcome to Springfield, Ill. — my hometown and a typical city of sprawl. It is an environment that forces me to cross a highway to access my credit union, jobs or the grocery store. Obviously, it is neither possible nor desired for a bicyclist to keep pace with the traffic rushing along at 50 mph.

If lives lost and bodies disfigured were what mattered, then the fact that cars are the leading cause of death for young people in America and worldwide would be enough to distance ourselves from the auto.

The persistence and importance of the automobile, in spite of fumes breathed or injuries incurred, is illuminated by the words that a middle-aged driver in a grey luxury sedan yelled at me, as I pedaled with traffic across the highway to my bank: “I respect bikers, but stay out of traffic!”

The illogic of this self-contradicting hail is worth discussing. If one respects bikers, but wishes them to stay out of traffic, when and where does one respect bikers? Should no one ride a bike during the rush hour, which actually often lasts six or more hours? The driver also reveals an us-versus-them mentality, with boundaries between driver and biker stark, unmoving and vital to defend.

How did we get here? We find ourselves in a time and place where the automobile is fiercely defended in all types of public spheres, from the streets to the halls of congress. The car has taken its place in the hearts of Americans in the form of road trips, soccer-mom vans and freedom narratives, yet we can argue — in terms both measureable and not — that cars are harming us, our families and our communities. Cars kill. Cars isolate. Cars poison the air. Yet it is precisely because we have invested so much into the regime of automobility that we continue to squander our health and wealth on this most greedy of family members. 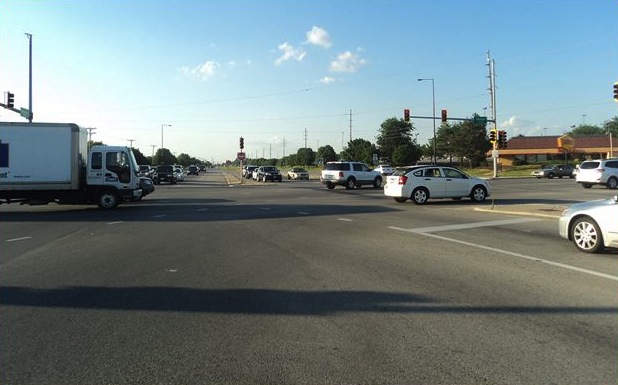 Cars criss-crossing at the intersection of Route 4 and Wabash Ave. in Springfield, Ill. Wabash, with a speed limit of 40 mph, is the only road that leads out of my neighborhood.

Much of the United States is intoxicated by the dream of a nuclear family in a single-family home, secluded along a tree-lined street. The car itself is an important symbol of happiness, citizenship and capitalist success in this story: family vacations, dropping the kids off at baseball practice or coming-of-age. Equally endemic, the architecture itself seemingly necessitates the automobile. Single-use development, coupled with spacious yards and garages, inefficiently put large distances between us, our neighbors and the goods and services we wish to access. Thus, the same architecture that bolsters the hegemony of middle-class, white and heterosexual normalcy supports and is supported by individualized and artificially cheap automobility.

Outside of residence-only zones, we have poured immense amounts of concrete, in the forms of parking lots and speedways, excluding anyone who dares risk their life (even more so than in a car) to visit the grocery store on a bike.

A satellite view of my neighborhood. Red lines indicate high-speed roads that separate home, work and basic goods and services like the credit union and grocery store.

In the map above, red lines represent streets where cars travel at more than 40 mph. The route between my home and my key destinations is blocked by highways and seas of parking lots, covering more than half of the area in focus. The immensity of the infrastructure projects become a form of control, forcing automobile use and a specific lifestyle along with it. 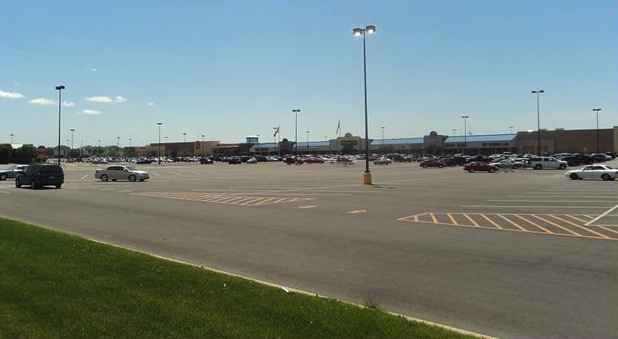 A small portion of the vast and ubiquitous parking lots in Springfield, Ill.

In the face of fatalities, skyrocketing rates of youth asthma, diabetes and obesity, ever-increasing travel times and destruction of our landscapes, why do we continue with the car? Auto and oil lobbyists pour millions into drowning out everyone else’s opinions. But social pressures and limited knowledge about viable forms of transportation are only part of the explanation.

At the heart of our obsession with the auto is an obsession with ourselves. Many of us have possessive investments in maintaining our privileged identities, and the car is a constitutive element of this process — be it class, race, gender or sexuality. Car ownership and use have become symbols of a privileged identity. Building our cities around this inefficient and deadly machine has excluded those who do not have access to or do not wish to participate in a very specific lifestyle.

When drivers hurl insults at bikers from their car windows, maybe their insistence on the dominance of auto transport actually represents a desire to perpetuate social norms that favor their advancement, despite the costs. We must acknowledge and understand the cultural capital of the car in order to reduce car use in favor of more equitable, healthy and sustainable landscapes.

Austin Miller recently earned an American Studies degree from Brown University. He continues to research the relationship between the automobile, culture and political economy in Buenos Aires with Catherine Lutz, chair of Brown's anthropology department.

Credits: All images from Austin Miller.