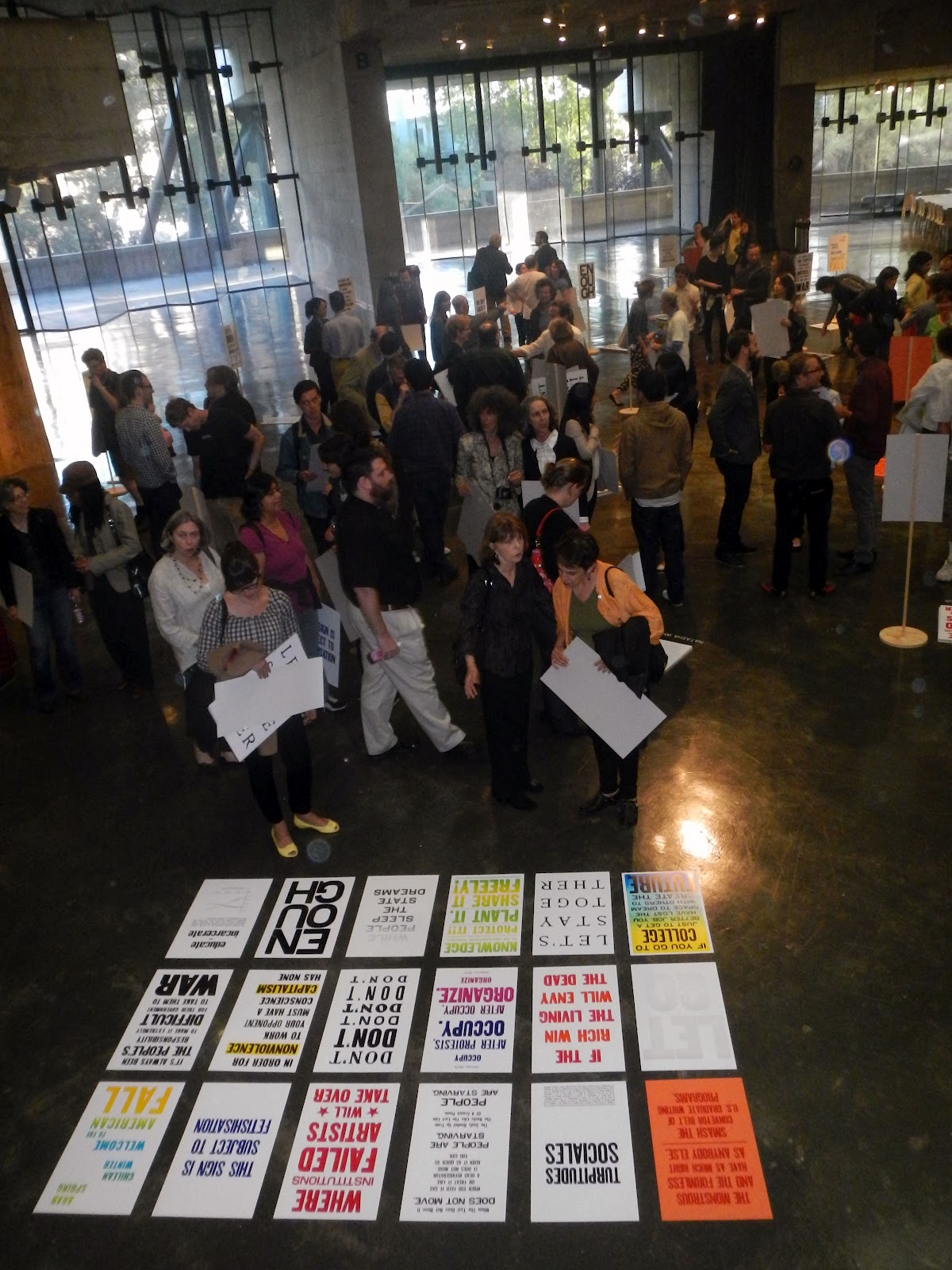 Has the thought of taking art from a public exhibit ever crossed your mind? During a recent art installation at the Berkeley Art Museum (BAM) in California, visitors were able to carry dozens of art pieces away, no questions asked.

In the wake of the Occupy movement, "In Protest" occupied the museum’s central atrium with a display of political posters by artists from the San Francisco Bay Area. The exhibit turned observers into participants in a symbolic act of political expression. Visitors interacted with the exhibit and appropriated the posters, giving them potential future lives on city streets and bedroom walls.


In a recent interview with Ian Dolton-Thornton, producer of the event, we discussed its focus on blurring the lines between public and private and between commodity and gift. 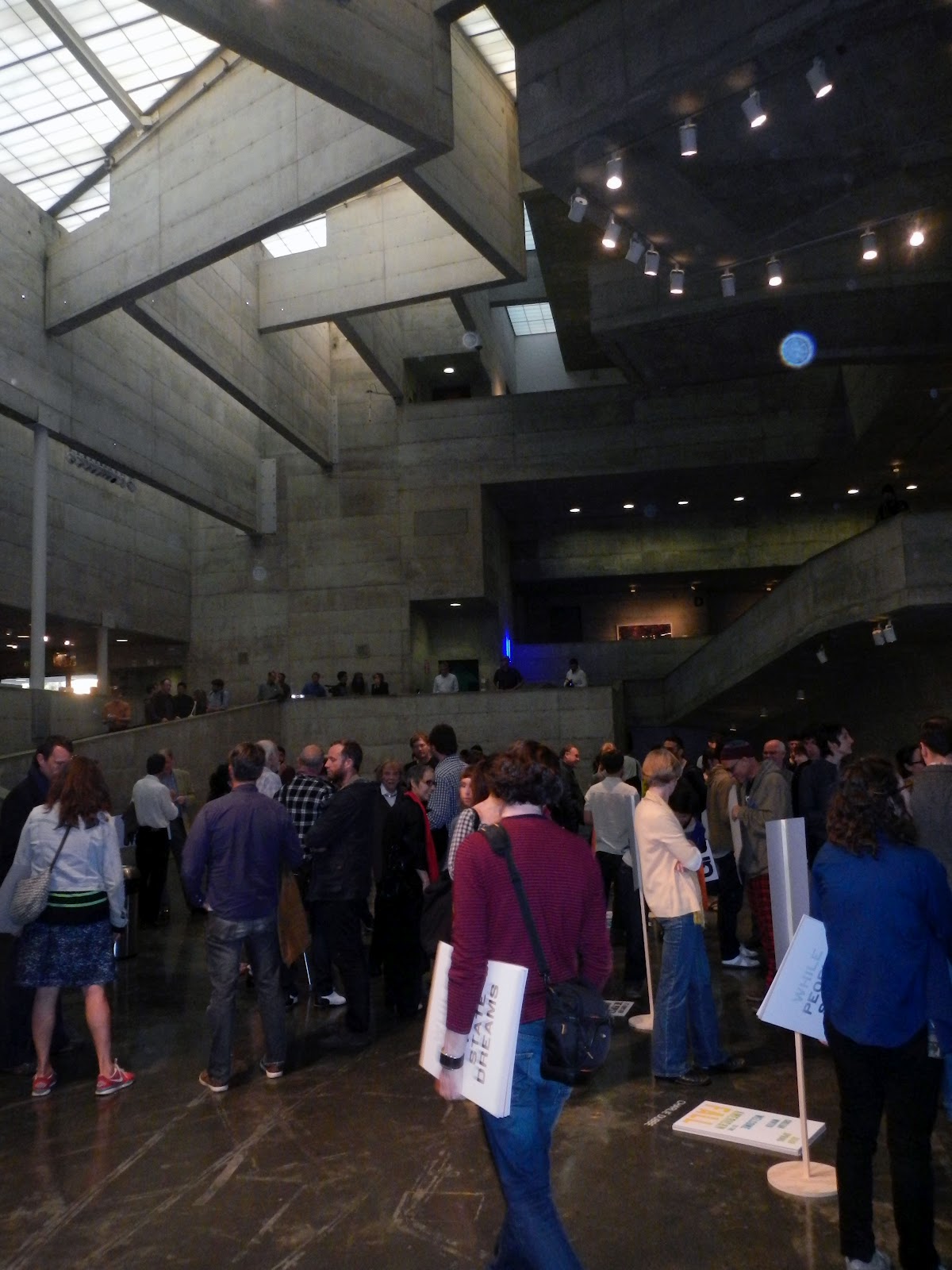 Who organized the exhibit, and why did you focus on the political poster?

The exhibit was curated by Joseph Del Pesco, the director of Kadist, and Constance Lewallen, adjunct curator at BAM/PFA. "In Protest" was intended as a publishing project to offer the invited artists and writers a space to articulate political concerns. Rather than documenting or representing political action that already existed, the project offered an opportunity to make visible some form of demand. 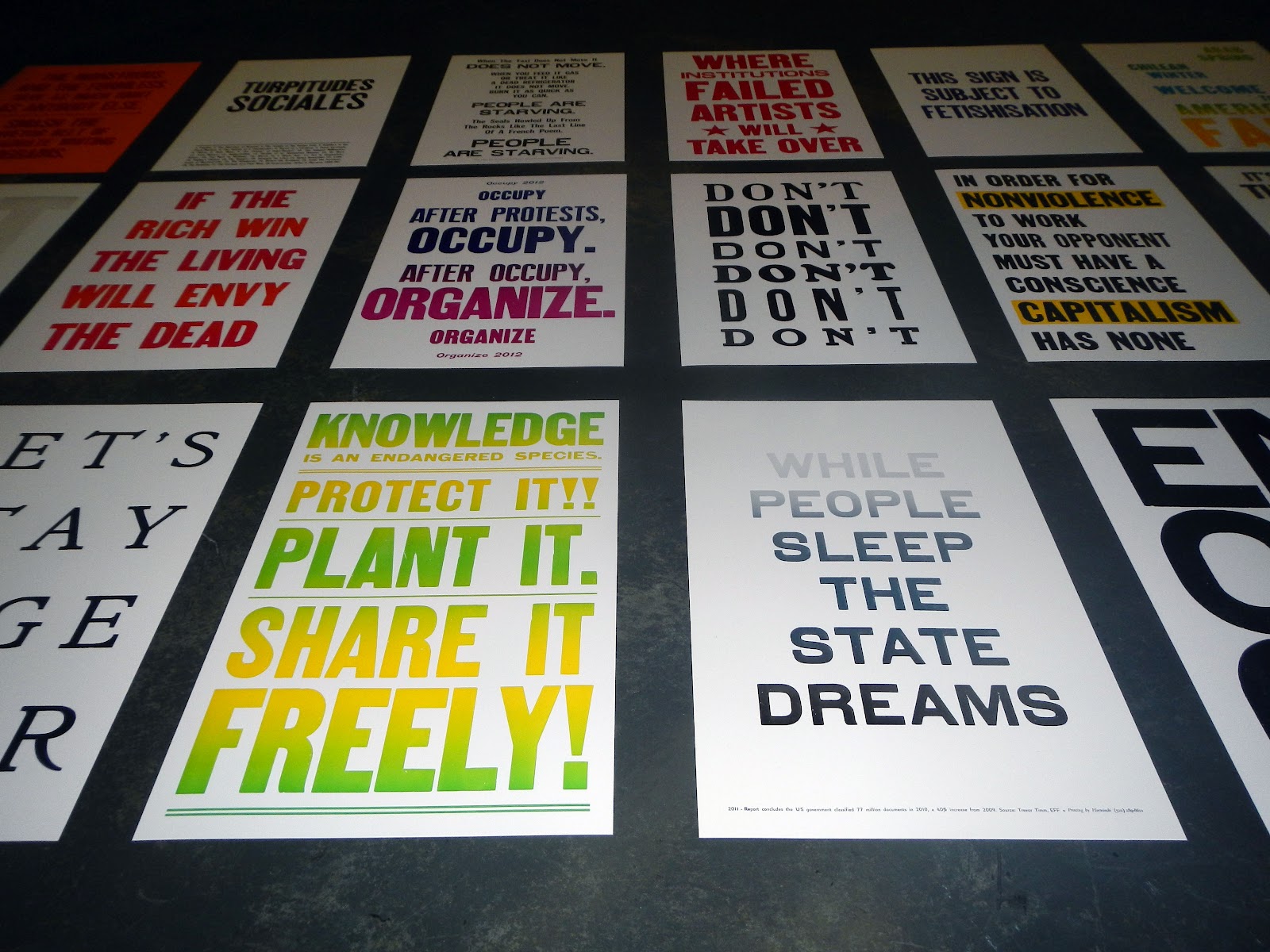 How did you choose the demands that became the messages on posters?

The content and the specificity of the demands varied widely. We collaborated with the invited artists and allowed them to come up with the text and, in a few instances, designs as well. Although there was some dialogue between the artists and us, we prioritized allowing the artists freedom to speak about whatever they wanted to. 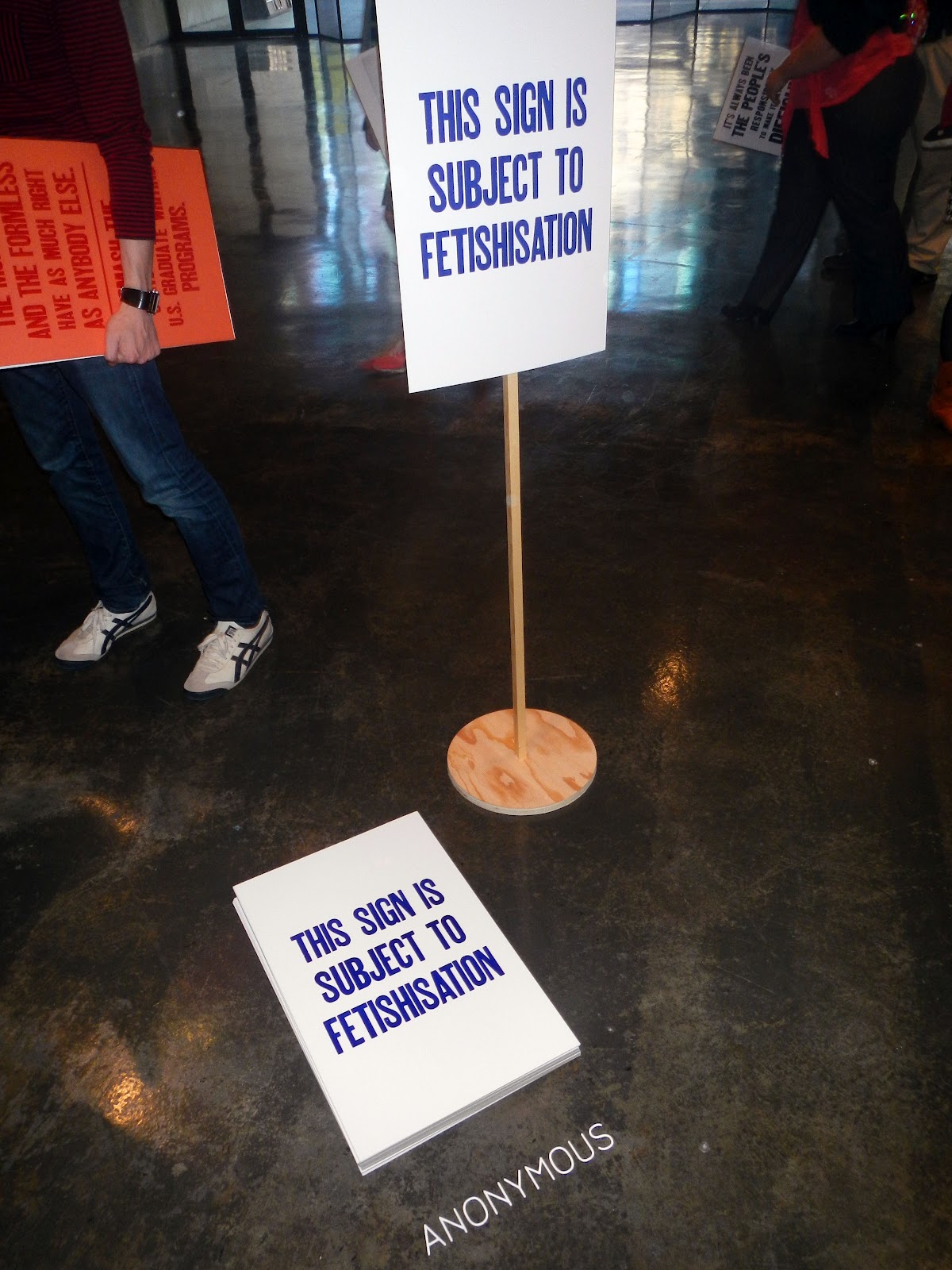 Why give away the art?

The posters were given away as part of the presentation at BAM and were also distributed to groups around the Bay Area who are working on issues raised by the posters' texts. The idea is that these posters can circulate and have a presence outside of display in a museum. The texts printed onto these posters can wind up in an organization's office, a bedroom, or political march. 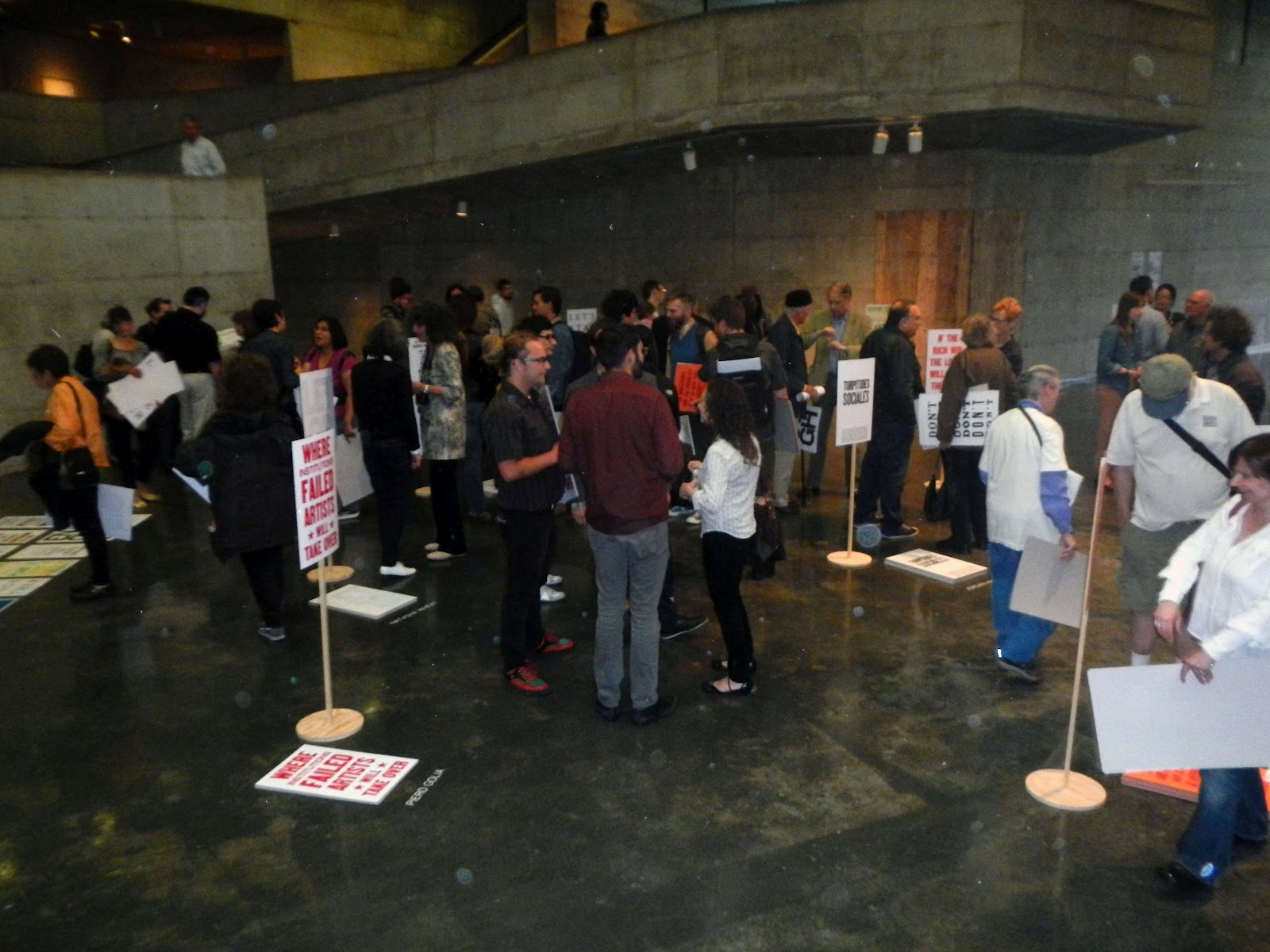 How was the actual spacing and arrangement at BAM conceived?

We knew that we wanted to have the posters stacked on the floor for people to take. We chose to have the posters up-right as well, to make them visible as a group, and on wooden posts alluding to pickets, to emphasize the sense of them being brought into view. Since the distribution of the posters is such a significant part of the project, the display arrangement was largely designed to facilitate viewing and gathering the posters.