The Invisible History of Safed 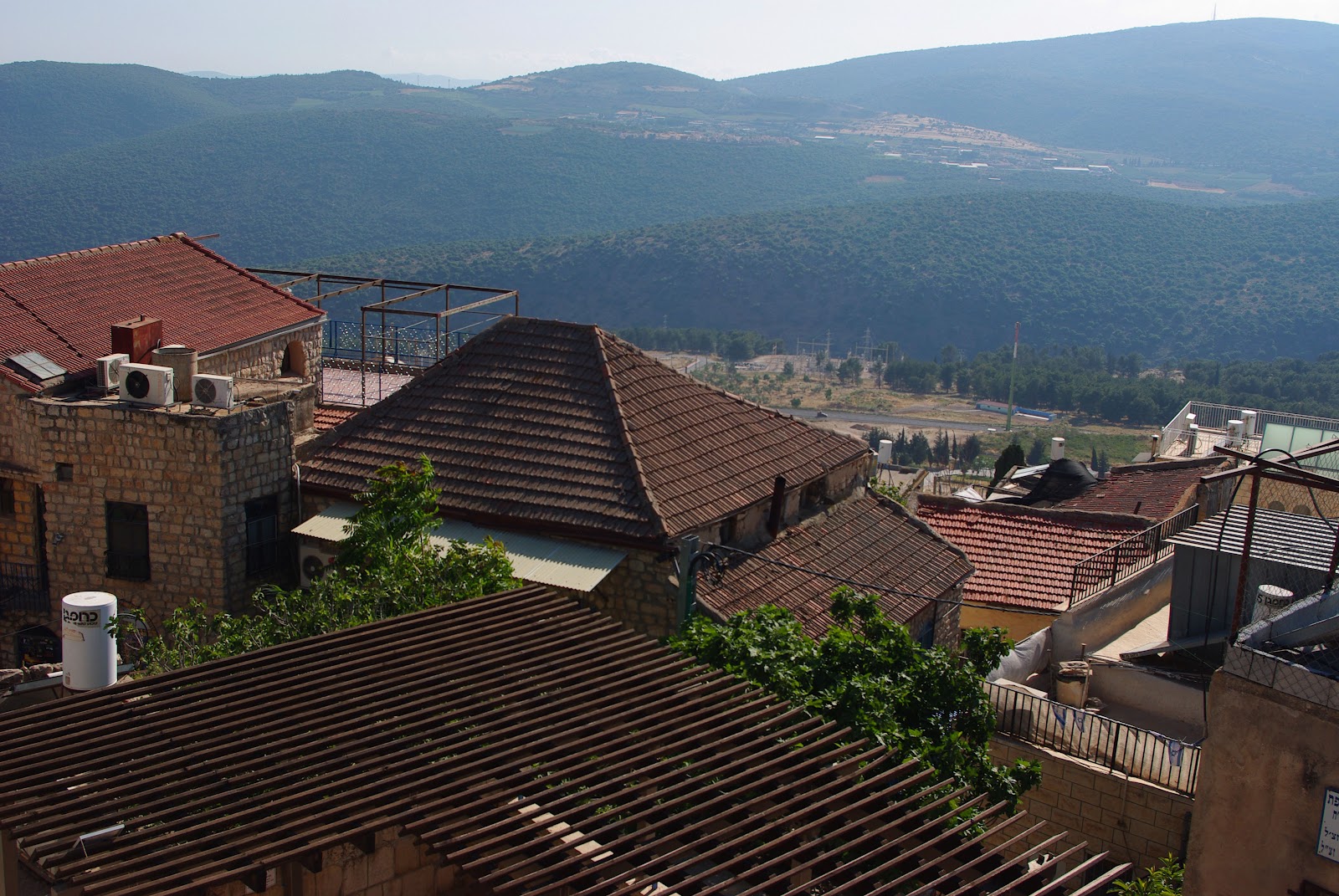 A view of the Galilee region from the city of Safed in Israel.

Those familiar with the great historic cities of Israel may know of Safed, a lovely mountaintop town overlooking the Sea of Galilee. It is considered one of the four holy cities of Judaism, as the historical locus of one of the great renaissances of Kabbalah, a mystical Jewish tradition, in the 16th century. Today it is a municipality with a high proportion of orthodox Jews, Russian and African Jewish immigrants, and religious and secular Jewish artists. Since 1977, the Palestinian village of ‘Akbara was placed under the jurisdiction of Safed.

Racial discrimination against Palestinian-Israeli citizens occurs on several levels: political, cultural, geographical and social. This discrimination is intensified in Safed due to the politics of the Galilee region, where Arabs outnumber Jews, and the extremist positions of ultra-orthodox Jews, who make up the majority of Safed’s population. Aside from the ‘Akbara village, Safed College and the Faculty of Medicine are both heavily attended by Palestinian students, and the regional Palestinian communities depend on Safed’s Ziv Hospital for health care. Racist graffiti (“Arabs are Dogs” in Hebrew), social pressures (prominent Safed rabbis have called for Jews not to rent apartments to Palestinians) and violence notwithstanding, Safed is in fact a solidly binational city, although the city center is virtually without Palestinian residents. 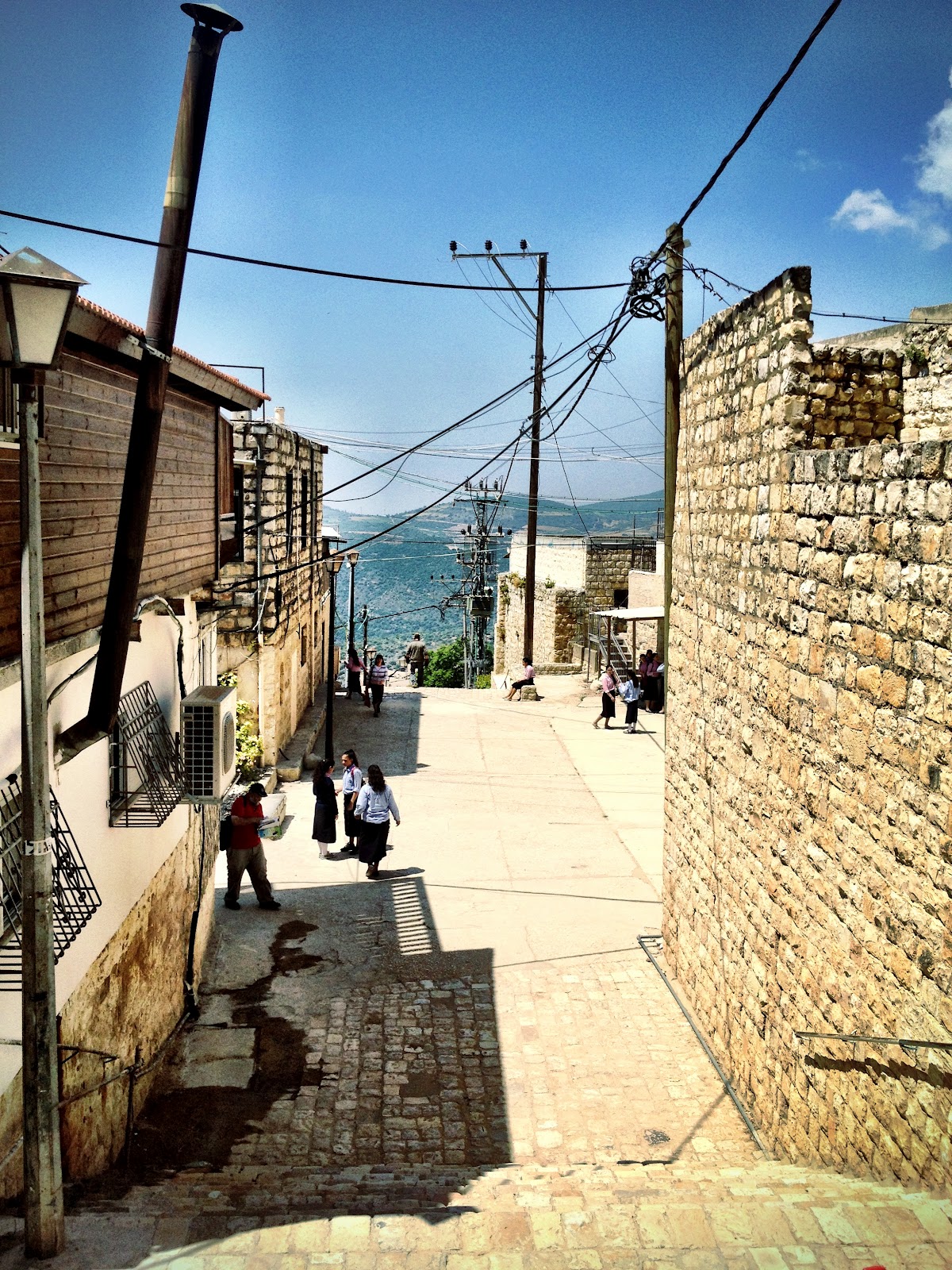 A street in the Old Jewish Quarter of Safed.

For a tourist in Safed, the Palestinian side of the city’s rich history is invisible. ’Akbara, situated under a bridge between a ridgetop and a pine forest, hidden just below sight as the main road curves along the countryside. Safed’s Artist’s Colony, which is in fact the city’s old Muslim quarter, contains a single plaque describing the war of 1948, with no mention of the religious traditions, culture or people who were driven out of their homes. Safed’s website, full of historical articles, makes the most glancing references to the Arab cultures that dominated the city for much of its history.

Safed was the site of many tragedies and dramatic conflicts. Jews were massacred and plundered several times by the Arab majority. The Crusaders conquered the city twice before being conquered in turn by the Mamluk Baybars. Safed’s devastating earthquakes, plagues and wars ravaged both its quiet landscape and its people. These are landmarks in a history that Palestinians and Jews endured together, until in 1948 Jews expelled Arabs from the city and occupied their property. Most tourists could easily come and go without having any sense of Palestinian history or presence in Safed. 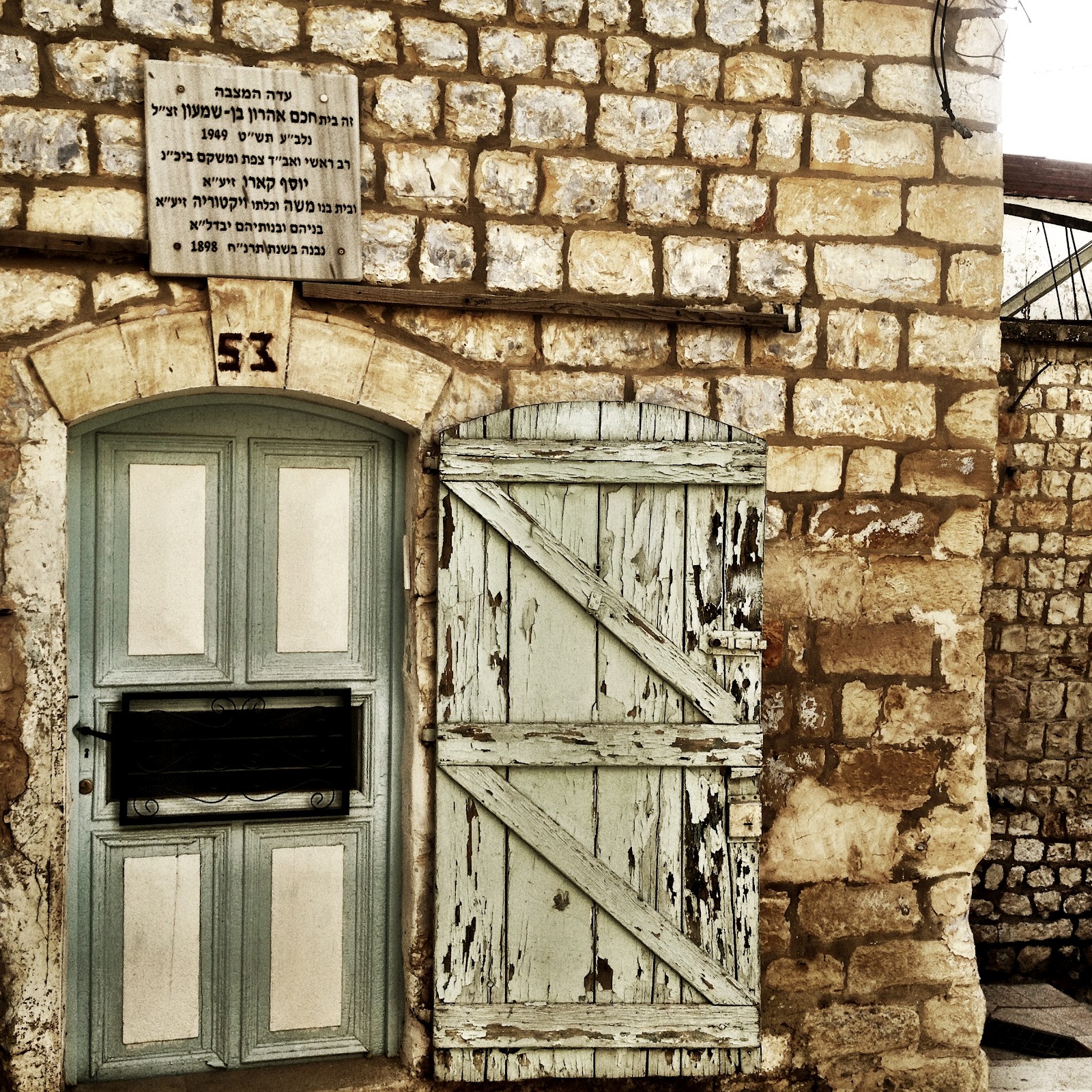 A doorway in Safed's Jewish Quarter.

This invisibility is particularly tragic because Safed’s rich history of Kabbalah has strong ties with the its history of the Islamic mystical tradition of Sufism. In both Spain and Egypt, which were centers for the wave of Kabbalistic thought just before the expulsion of the Jews and Moors (Berbers, black Africans and Arabs) from Spain, Kabbalists and Sufis studied together. They shared techniques for mystical devotion to God, which survive today.

With an influx of Jews from North Africa and Spain in the early 16th century, Safed became the new global center of Jewish mystical thought. Kabbalah bloomed in a rich community of artists, musicians and poets, who supplied many traditional songs and prayers still used by Jews around the world. At that time, Safed also contained a large center for Sufi mystical study and discourse, and Kabbalists and Sufis continued to study together and exchange practices for fostering individual union with the divine.

Today, hardly any obvious traces of Safed’s Muslim traditions or Arab culture remain. The old mosque, once painted gold and the heart of the Muslim community’s religious and secular activities, is now painted light blue (a Jewish symbol of God and heaven) and functions as an art gallery. There are traces of the lives of the Palestinians who once lived in Safed in the tangle of old olive, fig and grape orchards on the slopes of the city, and in the Turkish fortress Saraya, which once housed the Jewish minority and was a marketplace, inn and military base for the Ottoman Empire.

In the second half of the 19th century, the Islamic character of the Galilee, and Safed in particular, was boosted by an influx of Algerian and Circassian exiles and immigrants from Damascus and Transjordan. The history of Palestinian Muslims and Christians in Safed is largely absent from most historical accounts of the city available to tourists and Israelis. 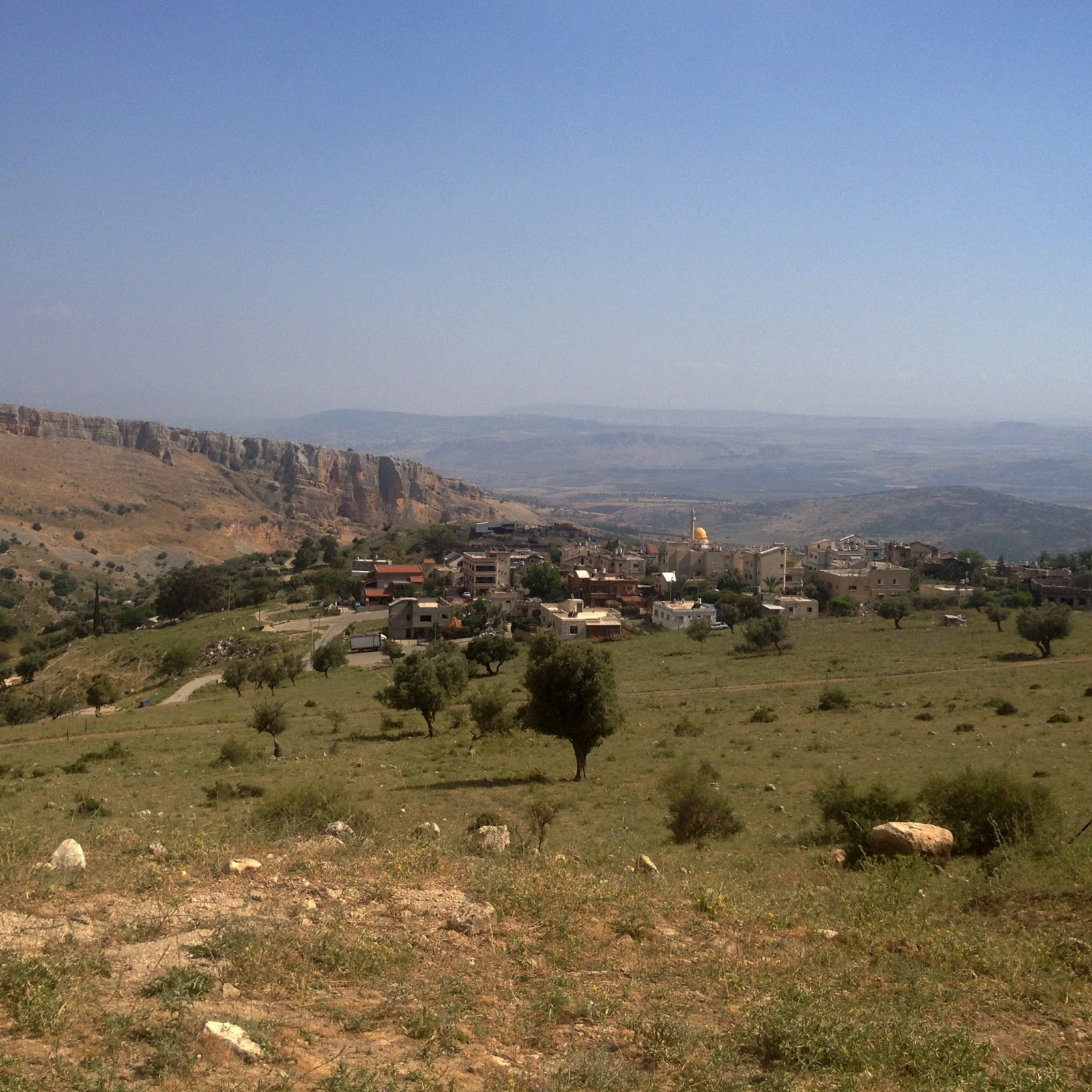 The village of 'Akbara today.

'Akbara is a small village made up of “present absentees” (surely one of Israel’s more surreal labels, this refers to Palestinians who fled or were expelled from their homes but remained within the state, homeless). Today, the village provides an idyllic-looking contrast to Safed, with its mounting problems of poverty and unemployment (40 percent of the city’s residents are on welfare).

In 1980, the municipality of Safed required residents of ‘Akbara to relocate across a small creek and demolish their original homes. Today, the village sits in a beautiful mountain landscape, between the forest and the sea, in full view of the old stone rubble of the former village, now vacant ruins or serving as stables for cows and goats. A little mosque sits at the head of the village, and vegetable gardens spill lushly over rough wooden fences, while horses and sheep roam the dirt roads and fields. The residents of ‘Akbara, like most Palestinian citizens, own very little of their own land and have poor access to health care, municipal services and schools. Between Safed and 'Akbara is the last remaining building of the demolished town of Al-Zahiriyya al-Tahta. The building, a Muslim shrine, is today a stony ruin perched on a cliff, overlooking a 700-foot drop to a forested canyon leading toward the sea. 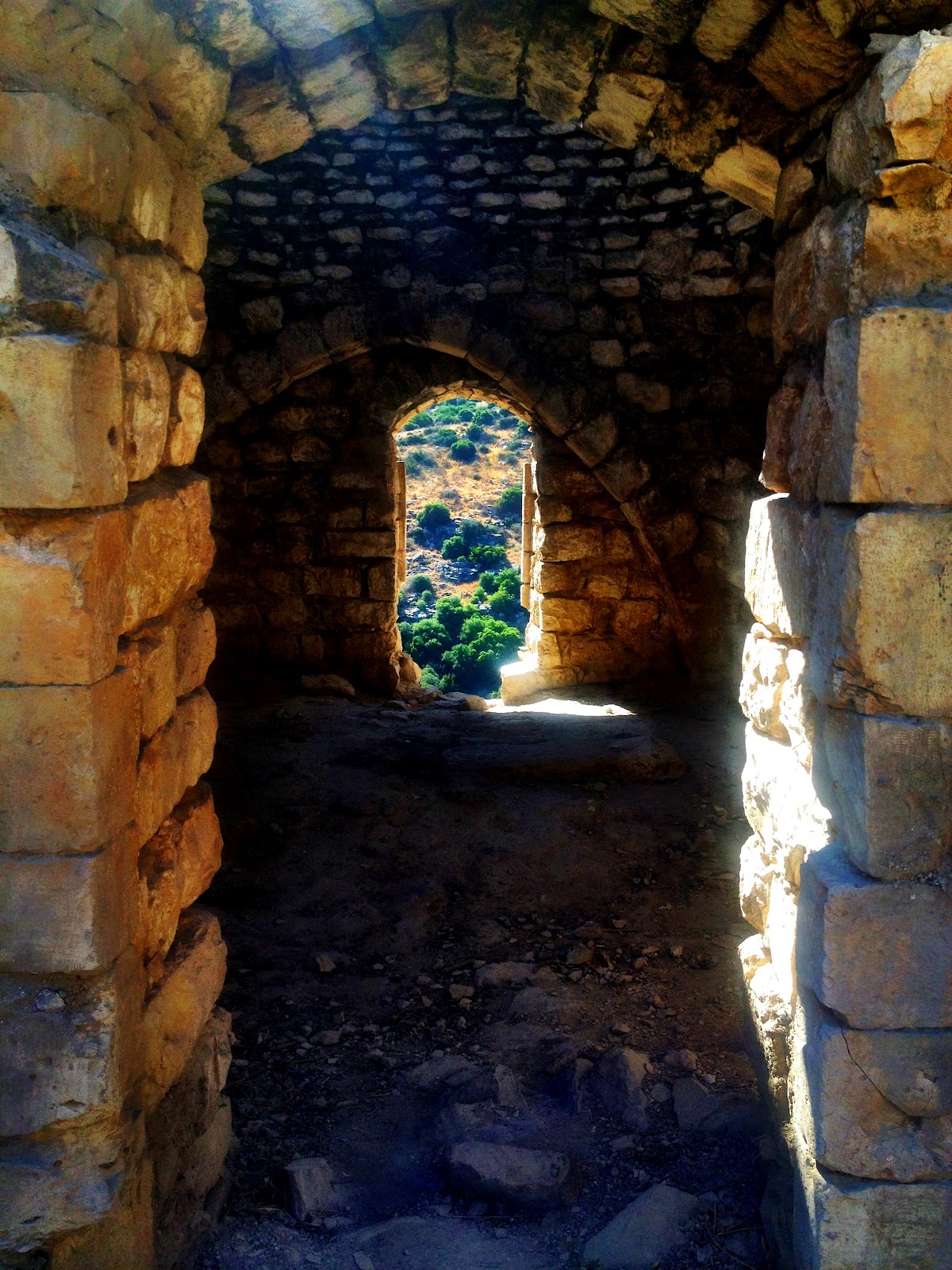 How can this invisible history (invisible, at least, to tourists and most Israeli Jews) be preserved? Safed is considering embarking on a long path toward the achievement of UNESCO World Heritage site status, a distinction that the city unquestionably deserves to have once historic structures are rehabilitated and stabilized. Although the municipality wishes to gain distinction and the economic benefits of tourism, this project is an opportunity for the city to recognize its dual history.

UNESCO is a branch of the United Nations that has been opposed to Israel’s occupation of Palestine and apartheid laws since Israel’s independence. UNESCO’s World Heritage Committee is specifically targeting underrepresented countries and sites signifying periods of peace and coexistence. In spite of Safed’s history of conflict, its Golden Age in the 16th century was a shining example of coexistence and mutual benefit, and it is in this aspect that Safed has the greatest chance for being internationally recognized as having universal value.

Safed as a center of Kabbalah is not complete without more research into Safed as a center for Sufism, as each flourished side by side, enriching one another. Safed, once the site of spiritual and religious cooperation and growth between Jews and Muslim Arabs, has far more universal significance than is now evident to a tourist eager to experience Safed’s traditional Jewish attractions. Celebrating the golden age of Kabbalah in 16th-century Safed cannot conscientiously or practically exclude the history of the Palestinians of Safed and the wealth of intercultural dialogue offered by Sufi teachers. Historical preservation is a resource and tool, just like sustainable design. It gains meaning when used to improve quality of life, especially for those with limited resources for political power, decent living and self-determination.

Eden Gallanter works with an Israeli NGO that is spearheading a project to register the city of Safed as a UNESCO World Heritage Site in partnership with the Antiquities Authority and Israel’s Ministry of the Interior. She has consulted on restoration and green infrastructure design in San Francisco, participated in the Occupy movement in New York, Oakland and Washington, D.C., reported for BBC World Radio and researched the Garden City movement in Buenos Aires. She holds a Master's degree in Landscape Architecture from Cornell University, a Master of Fine Arts from the Academy of Art University and a B.A. in English Literature from Vassar College.

“The ‘Aristocracy’ of the Upper Galilee: Safad Notables and the Tanzimat Reforms” (2005) by Mustafa Abbasi

“Safad in the Mandate Period: Social and Political Aspects” (2005) by Mustafa Abbasi

“Shalom/Salaam: A Story of a Mystical Fraternity” (2010) by Thomas Block

“As Light Before Dawn: The Inner World of a Medieval Kabbalist” (2009) by Eitan Fishbane

“Nature in our Biblical Heritage” (1980) by Nogah Hareuveni

“Palestine Under the Muslims: Translated from the Works of the Mediaeval Arab Geographers” (1890) by Guy LeStrange

“Zohar: The Book of Enlightenment” translated (1983) by Daniel Chanan Matt

“The Wars of the Jews or History of the Destruction of Jerusalem” (c. 75) by Flavius Josephus, translated (2009) by William Whiston

“A Journey into the Zohar: An Introduction to the Book of Radiance” (2010) by Nathan Wolski